Friday, 19 October: “When is Budweiser not a Budweiser?”

Ivan and I head north to Nottingham, and decide to save a little money and take the bus. Only 13 pounds and a 3 1/2 hour ride, or so we think.

At the bus station: more espresso from a machine. I liken these contraptions to those food making machines in Star Trek — you press a button and out pops beef stroganoff and a vintage chianti. Really, how can a machine replace a human being in this regard? At individual tasks, machines can do the trick, but a proper cup of espresso requires the grinding of beans, the steaming of milk, and the creation of Georgia O’Keeffe-like patterns in the milk. (Mental note: perhaps I spend too much time talking about coffee. Maybe I should spend my time getting a job or going to school or something).

The bus was comfortable if you like to spend three hours in a contracted yoga position. To be fair, it’s not like riding Greyhound and there’s no chicken or goats that roam the aisles or attack you from the storage compartments, but a bus’s main fault is that it’s attached to a road, and a road is attached to traffic and traffic extends our tiny bus journey by over an hour.

We meet my friend Sherry at the bus terminal. Leaving the bus is one of the most joyful expressions I experience today. I decide it’s best to vent the journey through a crutch, so we stop at Marks and Spencer, pick up a couple of bottles of wine, and head back to her and her husband Bill’s flat.

They’ve got a great place — the flat is fully furnished and I make my way to the most comfortable couch in the history of the universe ever and enjoy a glass of shiraz. (Bill and Sherry, thank you so much for the accommodation!)

Nottingham is very much a college town, and when we head out in the evening that fact makes itself very well known to us. We head over to a place called The Alley Cafe, a tiny tucked-away Vegetarian restaurant and bar. Ivan and I enjoy a bottle each of a Czech beer called Budweiser Budvar — apparently no relation, and it tastes worlds better than the American macrobrew of the same name. This and the two bottles of wine make for the beginning of what is to be a fantastic evening.

A DJ spins funk and soul hits from the 60s. Apparently this genre of music is making a comeback here. I welcome it, especially after the difficult listening hour of 80s soft hits at the Vietnamese restaurant in London.

Bar hopping! The Pitcher and Piano is our first stop, a desanctified church turned into a beautifully-sytled drinking establishment. While posh, it’s too crowded (and playing Ricky Martin), so we head across the street to The Pit and the Pendulum, a very Poe-themed bar. I wish the bars were this nice when I was at University. We place orders — I stick to Guinness. Ivan orders absinthe, a strange liquid likely made from gasoline and paint thinner, and an illegal substance in the United States. He’s never had it before, and I sense a chemistry accident will happen shortly.

The interior of the pit has all the appearance of an Edgar Allan Poe setting, except Edgar Allan Poe probably never played Top 40 dance music at his home. Still the visual aesthetic keeps us interested.

I’m intrigued by the ritual of college men-boys hitting on college girls. Every guy in the place is dressed the same: trousers, button down shirt and sensible shoes. Women, on the other hand, are wearing tight fitting, revealing synthetic clothing substitues, whether they should be or not. Their style of dress is much more daring than anything I’ve seen stateside, and I respect the fact that there seems to be less self-consciousness about one’s figure here.

We head across the street to a bar called ‘The Social Club’. There’s a cover, but Sherry gets us in without charge. (I love that. This guy Max I knew in Vancouver, BC, used to play saxophone at the Purple Onion Cabaret Lounge. There’d be a chain of people around the block waiting to enter, but Max would get us in through the side entrance, Good Fellas-style). The upstairs floor is playing funk and soul music! A couple of Guinness (Guinneii?) for me, and people-watching.
I meet a guy named Mark who wants to work as a programmer for Microsoft (Apologies in advance to Grant, who might be getting an email from a guy named Mark who wants to be a programmer at Microsoft).

I meet a guy named Dan who works at The Social Club and who’s flying to Vancouver via Seattle to see his girlfriend. (Apologies in advance to self, who might be getting an email from a guy named Dan from The Social Club). To do: furnish Dan with a list of nightclubs a guy with a voice and a guitar might play. Suggestions: the Breakroom, the Crocodile, and the Central might be a good start.

Bill left the club earlier, so Ivan, Sherry and I stumble home. Ivan’s *really* sauced. This promises to be a rough night and following day for him. 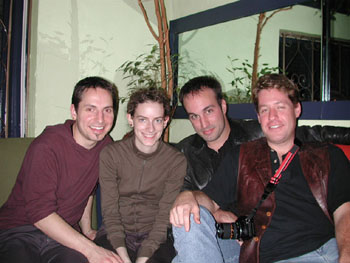 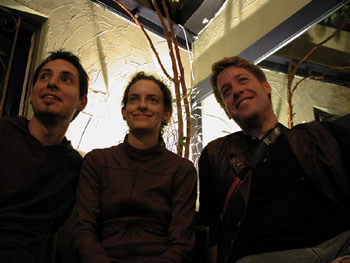 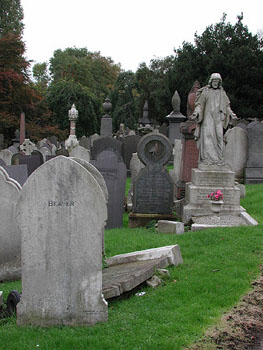 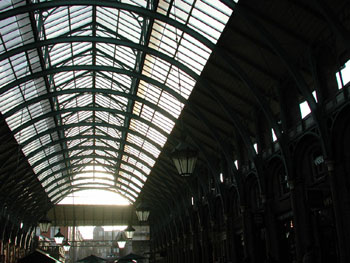