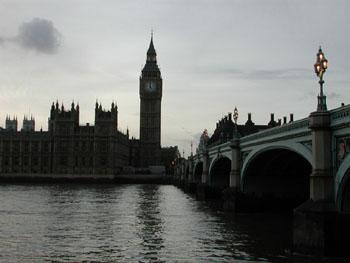 An uneventful journey through Customs. The first thing I notice is the polite demeanor in which customs officials ask for your documents — it’s almost a formality to bring them out, but nothing to worry about, really. I notice no additional security at Heathrow since September 11th – it seems like they’ve been set up for this sort of thing for a long time. It’s nothing like the snap-of-the-rubber-glove sound security precautions now installed at US airports.

My travelling partner Ivan and I met, and phoned his friends Iain and Storme (real names). They’re letting us stay at their flat until Friday. Both have the endearing qualities of computer geeks, and for a while we geek out with them, comparing purchase histories of personal computers at one point.

Since we’re in London, it seemed only natural for us to have our first meal at a Portugese restaurant. A television in the bar area displayed a Portugese news network. Most of it was directed at the events in Afghanistan, and footage was shown that hasn’t been seen in the US — most of it directed at the results of American bombing in Afghanistan, and its effects on the civilian populace. I really wonder how much of the conflict we’re seeing. We’re only beginning to hear about the dark side of the Persian Gulf ordeal.

According to mlb.com, the Mariners were winning game 5 in the bottom of the fourth. Dammit, I wish the Cubs would make a playoff series… (Addendum: they won 3-1… but they’re playing the Yankees now. Comment withheld.)

Design, graphic and industrial, is so well thought-out here — it’s compact, without excess, and elegant.)