I spend most of the day asleep. The events of the last few days, the long trip back to Dublin, the frustrating experience finding last-minute flights to Paris on Friday, and staying out until the wee hours whenever possible (a sweet memory of nightlife in Chicago) have taken a toll on my body, so I engage in the preventative medicine of deep, soothing rest.

I’m back at the same hostel again, with a private room and the sensible idea of a good night’s sleep. These ideas only last so long, however. I’m in the mood to dance and head over to Ri Ra at midnight. I hook up with a couple of people I met on Monday, and meet two more tonight:

It’s last call at Ri Ra. The Frenchmen suggest we all go back to their place, which we do, to smoke “cigarettes”. I smoke part of one, and am thirsty just a few minutes later. How about that? Conversations ensue in English, French and Gaelic. It’s amazing how much of this you can’t pick up in a few hours.

I move to another room in the hostel, with two twin beds. I have a roommate today — from Seattle! Specifically, Greenlake He’s a 21-year-old college student studying computer science at UW. We geek out a bit, and get a big laugh out of the small world situation.

Madonna’s ‘Ray of Light’ accompanies tv and radio ads for Windows XP, which debuts today. The more I try to leave Seattle, the more it screams to be recognized.

Apart from making sure my body is sufficiently caffeinated, nothing else happens tonight.

Ivan meets me at the ticket counter in Dublin on Friday morning, and tells me about his amazing time in Galway, the least important event being singing “My Way” with drunken strangers. Such a good time that he only had an hour and a half sleep last night and drove maniacally to Dublin averaging 90mph in 2 1/2 hours. I’m so glad I didn’t have to read about him in the Irish Times Police Beat.

Liverpool Street station in London, our connection between yet another set of airports, is an architectural marvel.

As we land in Paris, it occurs to me that I don’t know any French. We’ve got 3 nights at a cheap hotel near the Opera on rue de something-or-other. We’re now nine hours ahead of Seattle, but that still doesn’t help them beat the Yankees retroactively. It’s time to move on now. (Cubs in 2002!)

On our way to forage for food in English, we pass an establishment that boasts karaoke every night!

Dual-priced menus showing the franc and the euro. The euro goes into effect on 1 January 2002 and is so close in value to the dollar that we know exactly how much we’re being fleeced at the restaurant we eventually choose.

I’ll never drink coffee from a machine in the UK again. Wine is expensive, and damn, it’s good. No screwtop caps here.

Women and men are very fashion-conscious here, and it looks great on them. Leather is the new denim.

We pass the karaoke bar on the way back. Ivan’s tired, but I convince him that this is the fair and just thing to do, if only for either the children or the American PeopleTM.

Hey, everyone’s singing in French, and the audience is singing along! It reminds me of the time I was at a party a long time ago when the host put on a Garth Brooks CD and everyone knew the lyrics except me and proceeded to sing and I felt like I had entered a Twilight Zone episode or something and wondered if my friends that I thought I knew so well had been replaced with beings from some horrible alternate universe.

Ivan requests “It’s Now or Never”. He gives admirable effort, but the audience seems much more receptive to French songs. Maybe if we sang in *outrageous* French accents?

I get the courage to sing “Lady is a Tramp” (apologies to Jeannette, who reigns as the tune’s owner in the greater Ballard area) in English, and I belt it out as loud, as unapologetically, and as Sinatra-like as I can. This feeling completely overshadows the fact that I paid 9 dollars for a Heineken. I feel a part of Paris now, albeit a miniscule one. 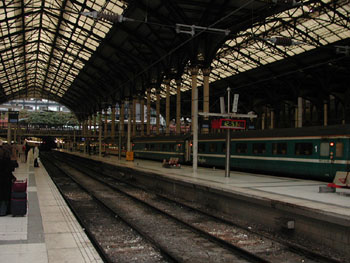 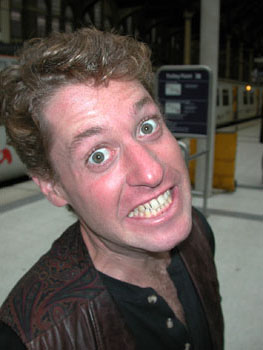 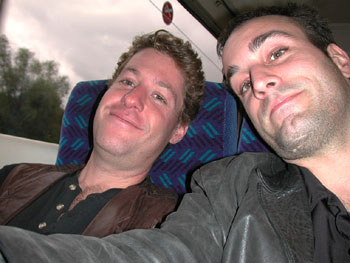