“Wasn’t it Shakespeare who said, ‘I drank what?'”
Val Kilmer, Real Genius

A very late start today. Poor Ivan — he has failed chemistry class, and is out for the count. Learned before we leave today:

We head out for lunch and a 2:30pm morning cup of coffee (after all, it *is* 6:30 am in Seattle) at the Cinema, a cafe with great espresso and an even better aubergine curry. Ivan orders nothing. Rather, he stares intently at a non-existent piece of dust in the air several yards away, when he’s not sleeping. Poor, poor Ivan. I bring him a glass of water and some mango juice. Still images of classic films are shown via projector onto a large wall in the cafe: The Big Lebowski. City of Lost Children. The Border…

We’re off to Edinburgh via Virgin Trains right now. Richard Branson, owner of Virgin Trains, Virgin Records, Virgin Megastore, Virgin Energy, Virgin Atlantic airlines seems to have a Gatesian quality in the ownership of many aspects of British life. The trains have a reputation for being late, and our train has the added distinction of being overcrowded. We’re SRO for a stop or two before we settle in for the 3 1/2 hour journey North, to meet my friend Mary’s friends Kenneth and Chris. Chris asked me if I wanted to do a little design work when I phoned them yesterday. I’m not averse to making a bit of coin while I’m here.

I picked up Bill Bryson’s “Notes from a Small Island”, at Bill and Sherry’s recommendation. An American writer, he lived here for 20 years with his British wife and reflects upon the cultural idiosyncracies here before their move to the United States.

Another long journey, and we’re thankful to arrive in Edinburgh. A cab ride takes us to Kenneth and Chris’s flat in the Stockbridge neighborhood, which they describe as a sort of trendy district. It’s a great place — spacious, tastefully decorated, and filled with four Macintoshes! It looks like I’ll be helping Chris put together the design for a CD cover and booklet for a BBC film archive disc he’s made, containing mostly audio clips and some video footage of old BBC shows. He describes it as a remix for a new generation.

Kenneth is a cinematographer. He was here this summer to talk to Mary about a film project she’s interested in doing next year. I pass him an envelope from her friend Tom, a fisherman he’s interested in sailing to Alaska with next summer in order to film fishing boat adventures there. Tom has given Kenneth a couple of crosshatched renderings of what he might expect — it looks like he’s going to be quite cold up there.

Ivan and I are hungry. His hunger is much worse, though — it’s that post-hangover hunger that immediately hits when the alcohol has left your system, and a tad before the healing begins. Fortunately, across the street, is a restaurant that serves… Mexican food! The burritos aren’t bad… it’s a little strange hearing “Oye Como Va” at a Mexican restaurant in Edinburgh, though.

Two Americans are sitting at a table next to us (do we all sound that nasal? Wow…), and discussing websites. Maybe they’re from Seattle? Or maybe they’re unemployed, like Ivan and I, remembering the Age of the Great Extraction of Cash from Large Corporations. Hmm…

“Poison Ivy” with Drew Barrymore and Tom Skerritt is on BBC 4 tonight. To be fair, we get that karma back when PBS shows “Are You Being Served Again?”

The UK version of ‘Who Wants to Be a Millionaire?’ allows a contestant the chance to win one million pounds! That’s like 1.5 million dollars! Great deal, that. I wonder if the Italian version is one million lire. That’s what… 10 dollars?

And they’ve got ‘Lost’, the show where they drop three groups of two contestants at a secret location. They end up getting planted in Venezuela, and have to find their way to London, via Martinique. Really, though, they just have to get to Martinique, and book last-minute flights home with money provided when they get to Martinique. (Where’s the sport in that? Ivan and I have spent several hours doing that this trip…)

Anyway, one of the teams drops out, and one of those team members is happy to be done with it. The film crew follows him home to his wife, kid and dog, and they rent ‘Friends’ videos and order kebabs for delivery. I was thinking that the episode should have started filming here. The show would be called ‘Lost’, but a person is dropped at a location known to them (say, in front of the living room tv with kebabs and Friends videos) and then has to discover themselves through risk-taking. Maybe they become gurus or something in the process.

Swearing and nudity are allowed on television here. Most of the swear words are British, so I have little idea what they mean, and why they are swear words in the first place. Pratt? Bugger? Londoner?

As I write this entry at Kenneth’s place, a group of women are returning from a pub and very loudly singing “Summer Nights”.

I like the vibe here — it’s a bit more laid back than London. 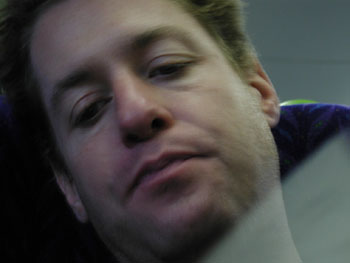 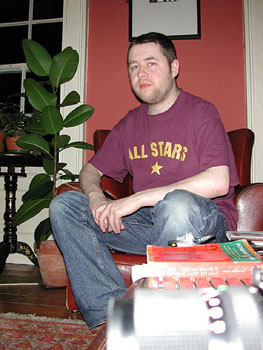 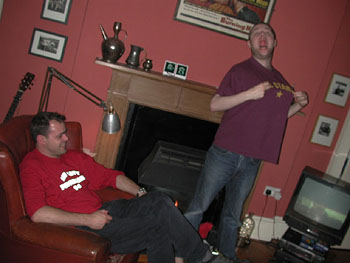 Chris keeps me busy today after breakfast. I spend most of the day helping him design the CD cover and booklet. We order in Chinese food and watch ‘Father Ted’. One of the characters, Father Jack Hackett, is so memorable that I’ve ended up shouting his curse words sporadically, sort of like Irish Tourette’s, to this day.

Later, on a mini pub crawl, I find out I’m sitting next to Mark O’Donnell, part of a Scottish TV comedy series called “Velvet Soup”! Kenneth, Chris and I talk to him for a few minutes. He’s surprised anyone outside of the UK has seen the show, but I let him know that I saw it when I was visiting Scotland this summer. He finds out tomorrow if the show is picked up for a second season — fingers crossed.

Anne Robinson is on the front cover of a Sunday newspaper magazine. Anne, tell me *I* am the weakest link! Hello!

They get Ricky Lake and Montel Williams here. To be fair, we get that karma back when PBS shows “Are You Being Served Again?” 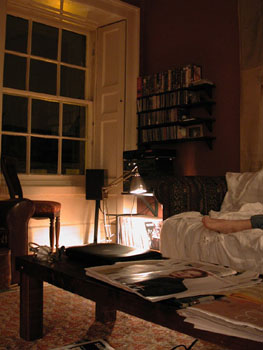