Friday, 9 November(continued): “Passive-aggressiveness, London style”Not all is perfect in London. I’m used to passive-aggressiveness in Seattle. When I first moved to the Emerald City in 1994, I thought, “Wow! How laid back, polite and flaky is the populace!” It was when I attempted to find a place to live that I realized how aggressive people could be here. At the time, the rental market had a 1% vacancy rate, and stories of 30-50 people waiting in front of an available property were common.

I was reminded of this as I try to board a coach during rush hour to Vika’s house in order to meet a gathering for a Russian dinner she’s cooking. A polite queue at the bus stop becomes an all-out shoving. It’s strange in that, only seconds before the bus arrived, people were polite and friendly, and then upon seeing a double-decker bus fogged with the sweat and smell of an already over-capacity crowd, did they scramble towards it wanting in on the action. It was kind of cool, though, to see businessmen and blue-collared folk compete for space on a loaded clown car that is a London bus.

Dinner is beautiful. The wonderful vapors emanating from the borscht remind me of my grandmother’s house (which at times could have both the smell of mothballs and boiled dumplings), and the surroundings in which the food is served are elegant — a welcome departure from a hostel common area.

The conversation jumps around the room erratically. At one point, we discuss Italian game shows, and why a bikini clad woman is usually present in each of them, and that her sole responsibility is to do nothing more than smile at the camera and wear a bikini.

It’s cold tonight, and we have to take the bus back, because the Tube stops running around 1 am. It gets us to London Bridge, only halfway to our destination. A shabbily dressed man asks us if we need a cab. He’s not licensed, as his rusting Hyundai Excel imitation indicates, so we wave him off. Money is well spent for the cab that does arrive 15 minutes later.

Ivan returns at 2:30 am. He missed the dinner, and we talk about the day’s events and what we might possibly do with our respective lives after we return to our respective cities of residence. 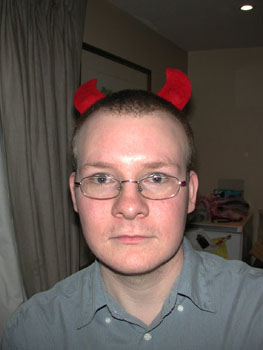 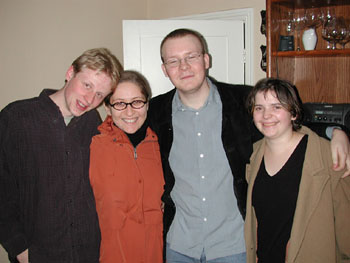 Ivan’s off to LA, and I pack while watching a BBC Saturday morning children’s program, featuring a cartoon starring good and evil sumo wrestlers locked in life and death struggle.

I realize the finality of this journey as I purchase my one-way ticket to Heathrow at Earl’s Court station. I’m going to miss this city.

On the flight home, we’re stalled an hour. One of the passengers has had a medical emergency, which seems strange because they haven’t served lunch yet.

An Aussie woman sitting next to me is flying to Seattle to meet a friend. It’s her first time to the US. We talk about the WTO riots, Seinfeld and the Simpsons. It’s like she’s lived in America all her life.

“Funny thing, globalization,” I think, as the British Airways Flight 049 penetrates the cloudy gray shell that makes Seattle my home.